Long Live Livi, is the story of three ambitious skate girls on a mission to save Livingston skate park. The film is the first from SDI’s ‘Right Here’ initiative to be shown on BBC Scotland.  We caught up with the filmmakers, for a short interview the day before transmission. 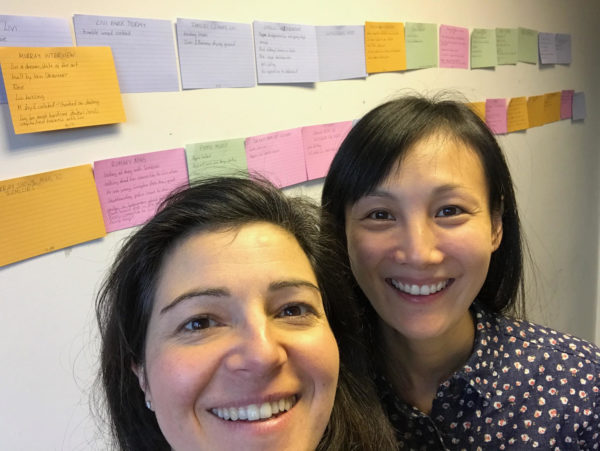 Could you tell us a bit about yourselves?

Ling: I’m a director and editor whose work focuses on human stories and crossover cultures. I’m originally from Berlin – but I now live in Scotland. I’ve made films in the UK, China, and Argentina – which have been broadcast on Al Jazeera, BBC Scotland, Channel 4, ARTE/ZDF, VPRO, and screened at international film festivals. I’ve won numerous awards for my work as director and editor – including the One World Media award and the Edinburgh Trailblazer award.

Parisa: I’m a documentary director and producer based in Edinburgh. I have a company ‘Urquhart Media’, and its mission is to ‘make game-changing stories that challenge the status quo’. It does this by making factual content that encourages positive change – educational and informative with impact. Up to now the company has produced and directed current affairs films and short cinematic documentaries for Channel 4 News, BBC, ABC Australia and Universities. Further films are in the development and commissioning stage.

How did you get into filmmaking?

Ling: I have a background in art and photography – so visual storytelling has always been important to me. But when I discovered film, I was really excited by the possibilities of combining visuals with sound. I went through a process of experimental filmmaking, before focusing on documentary. I became fascinated by documentary filmmaking because I could dive into different worlds and get to know unique characters. It has always been important to me to incorporate my playful approach to visuals and sound with a strong narrative. One of the most attractive things about filmmaking is experimenting with new ways of telling stories.

Parisa: I always had a passion for film and documentaries. This passion persisted during previous careers in the sports and property industries. I eventually undertook filmmaking courses when living in Australia during the last ten years. Following this, I worked on documentaries by Sydney media companies who had international clients such as the World Wildlife Fund. When I came back to Scotland I established Urquhart Media Limited, which enabled me to produce and direct content that has a particular focus on identity and colonisation, and an emphasis on truth and education.

How long have you worked together?

Parisa: I had produced and directed a short film in 2018 that I needed an editor for. Ling was recommended to me and I immediately contacted her in January 2019 as I was keen to work with a female editor. We clicked and got on so well and the process of the edit was really enjoyable. So I knew it would be a great experience to work with Ling Lee as a co-director.  Our talents complemented each others’ making the often-lonely job of directing a fun and inspiring collaboration instead. Our visions of what we wanted to achieve were so synced.

Ling: We immediately got on well when we first met. Consequently, it was an easy decision to decide to work together as co-directors. We always managed to openly communicate with each other – which was the key for me.

About being women in the film industry

Parisa: Women are definitely under-represented in the industry and I realised from a young age that women have a massively different point of view from men when I was watching films and documentaries – it was blatantly obvious that I would have directed the films I saw in a completely different way. I still often see that now. I also have Persian as well as Scottish heritage that I notice gives me quite a different viewpoint on subjects.

It is good that initiatives like the SDI’s 50/50 are being established so we can get more support and coverage. We need to get a good balance of directors creating content  – I want my work to be taken seriously, I want ongoing mentorship from more experienced people in the industry and my future ideas to be considered and supported. I have found Scotland to be very supportive for documentary makers in general compared with Australia and if we can improve the statistics and get far more than 1 in 6 women directing then we will be really standing ahead of the curve.

Ling: 50/50 is a really positive initiative. The number of female directors in the industry is much too low and this scheme can help to change that. By increasing female representation, we can produce diverse stories and encourage different ways of making films. By addressing the imbalance in this male-dominated industry, we can encourage women to thrive and produce films in ways which are true to themselves. Also, in regards to mothers – and fathers too – I hope that the overall working culture within filmmaking will improve. The industry needs to look at things like flexible working hours and sustainable working practices that will nourish society. If more mothers are enabled to work – and allowed to work on their terms – I believe this would present a much more positive future for the industry.

What’s next for both of you?

Parisa: We are definitely going to be working on projects together in the future and we are in the process of discussing a few exciting ones at the moment! I continue to do short films for Channel 4 News and I am in the process of developing a feature and some one hour programmes for broadcast.

Ling: We’re always talking about next projects! I’m also working on a new film for BBC Scotland and a feature-length documentary which is in early development.

Would you like to hear more about SDI's Women Direct campaign?